This project is non-commercial, however you can help me pay the server bills. If you want to do so, use the links below to send me any sum you like.

1) New gamemode "Kreedz" was added.
In this gamemode you play against the time. Complete a challenging maps consisting of a different obstacles and beat other players' best times. Maps in this gamemode feature different techniques available in Source engine games: bunny hop, surf, long jump, etc. Press radio keys (by default [Z], [X], [C]) to access gamemode functions such as voting, UI disabling, teleportation to start, etc.
Note: All included maps are hard but they are tested by me to be completable without modifiying game settings such as sv_airaccelerate.
For modders: Click here to find out how to make your custom maps compatible with this gamemode.

2) Iconic and full-size map BIGCITY_PVP was added.
This map existed only in 2013 Korea OBT version of the game and it was x1.5 times bigger than the BIGCITY_MAIN map that Nexon made in 2014 to reduce the load of their servers and players computers. It was a tough challenge to obtain that specific version of the game and to adapt the full-size map to the latest game engine without problems. After asking many different people about fixing the map crash, I eventually managed to do it by myself. This map can be played in "Big City: PVP" gamemode. This map is probably the biggest one in the history of Counter-Strike games.

3) Iconic gamemodes "Big City: PVE" and "Big City: PVP" were added into the game.
The most time consuming and tough challenge of making this update were recreating these iconic gamemodes. I were working on those gamemodes from October 2021 and now they are finally ready to be played. Gamemodes were coded from scratch with watching the original videos on YouTube and investigating partly leftover Nexon's files, however I made numerous changes to make a gameplay even better than it was on the Nexon's servers. I will not dive deep into the mechanics and features of these gamemodes. Just go and play it by yourself solo or with other players to get a full experience from those gamemodes.
Note: Gamemodes can be started via "Quick Start" button of the game's main menu. Like in other gamemodes with a complicated code (Zombie Crush, Zombie Zeta, etc) you cannot continue playing if the room host leave the game. Make sure to have at least 1 hour of free time when hosting these gamemodes for other players. Press and hold [I] button to check the User Stats. Press [C] button and then "Extra: Suicide" if you stuck somewhere in the map.
Note for other servers' players: These gamemodes can work properly only on my server due to the way they are implemented into the game.
Question: Why are the NPC's doesn't run towards me when I'm far away? This is the consequence of the game optimization. Nexon coded a radius for all NPC's and being outside that radius will stop the AI completely (can't see enemies, can't perform scheduled tasks (for example, attack the generator on EP.1 of Zombie Crush), etc).
Support the creator: If you enjoy playing Big City gamemodes consider supporting this server.

4) Special Big City items were added to the Shop.
You can buy the following unique items in the game's Shop:
1. "BC Character Slot +1" allows you to create an additional character for the Big City without deleting the previous ones.
2. "BC Respawn Ticket" allows you to respawn in 4 seconds instead of 10 seconds and keep the primary weapon you had before dying. Consumed by the game automatically if exists in inventory. 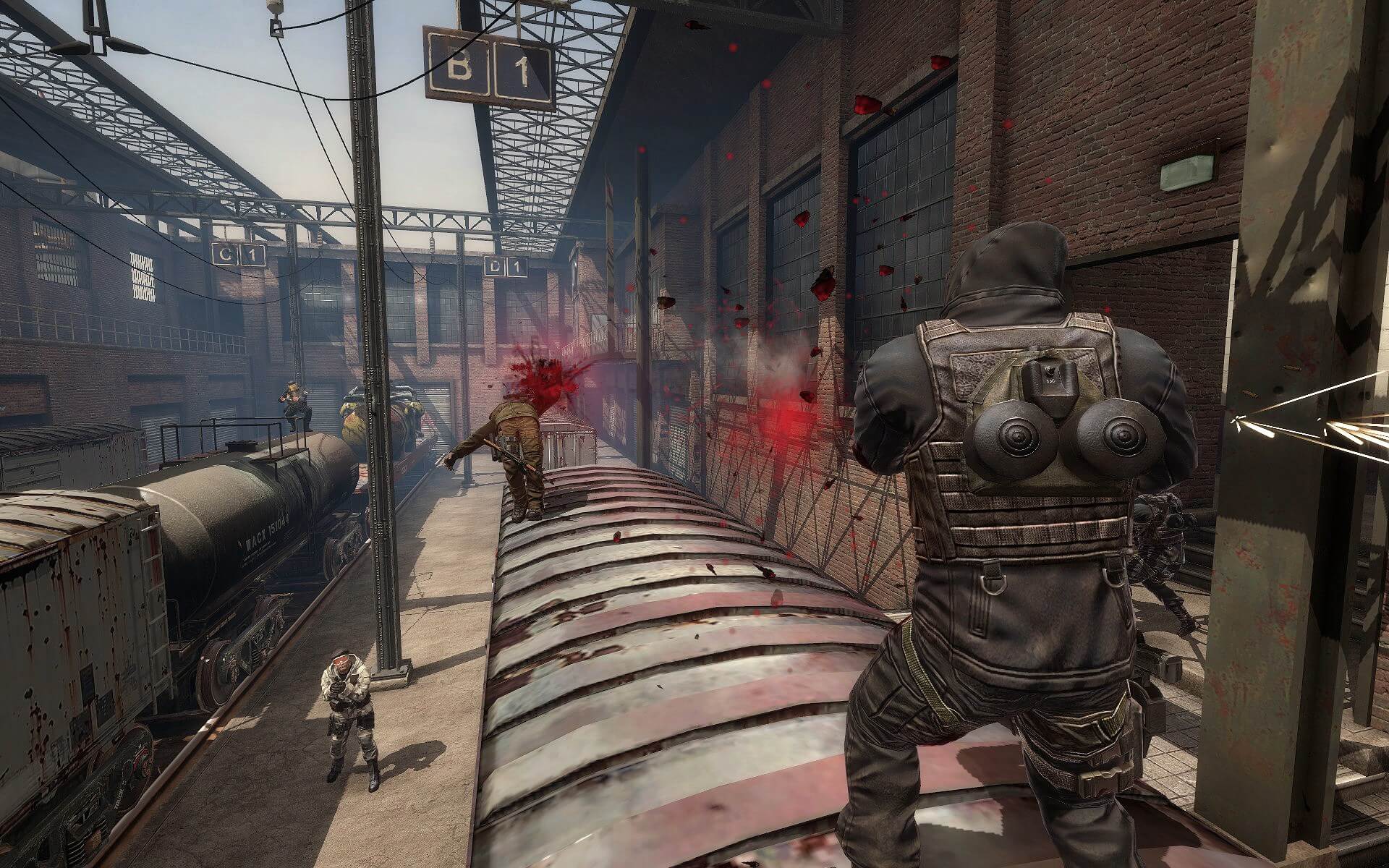 5) Game file system was greatly optimized to improve the loading times and reduce the game size.
DOWNLOAD THE NEW VERSION OF THE GAME TO BE ABLE TO PLAY! PREVIOUS VERSION OF THE GAME IS NO LONGER SUPPORTED AND CANNOT BE UPDATED.
1. It is a known fact that launching a fully unpacked game (without .pkg files) increases the startup time significantly. Depending on your HDD/SDD, CPU and other factors, time required to load the game decreased by up to 40%. The maximum speed boost happens if you are using the Low game settings. On higher settings game still loads slowly when you about to enter the Login Screen. I unpacked all files of the game and then packed only the most critical files that should not be manipulated by players, including few custom files (prevents cheating and content stealing).
2. All yet non-compressed textures and maps were LZMA-compressed to reduce the game size. Note: Compression of textures does not downgrade their quality. LZMA compression does not reduce the loading speed noticeable.
3. Custom content is no longer duplicates the original game files but replaces it. All changes led to the game size reduction of ~1.1 gb.

6) EU/RU Server was renamed to Global Server. There are various benefits behind this decision such as: better describing of server audience, easier to remember the name, etc. 100% of players participated in the private voting for renaming said "Yes" to this idea. Also, since http://organner.wohlnet.ru was initially created for my personal needs and not for CSO2 stuff, I decided to make a more recognizable address. New better-looking site of Global Server's site was created and hosted at this address: https://cso2.wohlnet.ru
Names of the new networks in Radmin VPN: cso2-1, cso2-2, cso2-3, cso2-4, cso2-5, cso2-6. Password is the same as before: 123456.

7) Various bug fixes and server/client improvements:
1. Campaign is playable again.
2. Missing icon of a train was added to the "Zombie Commander" gamemode.
3. SIG MPX GITS weapon model no longer placed between the character's legs in third person view. Fixed the shoulders of the "COLOR" characters in first person view. Fixed visual bugs of [SS+] weapons.
4. DE_INFERNO map got a correct marking of bombsites (Nexon's workers for some reason marked A as B and B as A). Maps from the previous versions of the game (AIM_DUST, DUEL_DINER, etc) no longer crash the game.
5. If your friend is playing in the room with enabled broadcast, you can start watching that broadcast via the friend list. Added additional status "Watching Broadcast" to a Discord RPC system.
6. Added "Double Defense Vintage" [B] weapon skin made by Kinnerokhn. Added "Mk14 EBR Chrome" [S], "QJY-88 Chrome" [S], "Steyr AUG A1 Chrome" [S], "Daewoo DR200 Chrome" [S], "Sako TRG-42 White Gold" [S], "Mosin-Nagant Royal" [S], "M1903A3 Springfield Royal" [S] weapon skins made by SilverCatzZ. You can get them from the "Light-Blue Case". Click here to view drop rates.
7. Added all existing Big City related achievements.
8. Reorganized UI elements: Title and level in User Info no longer overlaps the clan icon. Level was moved down from the title string to the username string in the Room because some title names are too long to fit properly. There were 2 Nexon logos in a row when launching the game, so one of the logos was replaced to the Valve logo as it was back in the days.
9. Increased maximum number of players in "Gunball" gamemode from 10 to 16 players. Fixed player list on "RPG Battle" gamemode. Increased number of players in "Z Crush Side" gamemode from 4/5/8 to 8/8/8 players.
10. Updated Global launcher (cso2_global_launcher.exe). Now it doesn't crash in 1% of cases. It also got a new option "Debug Information", enabling it will write "Loading decrypted / Loading unpacked" in console for every custom file. Also it will write additional system logs to your Bin/Logs folder and to console. Also you can change its background by changing "cso2_global_launcher_bg.png" in the Bin folder, image size is 1024x576 pixels.
11. Updated game launcher (launcher.exe). Added console command "clear" can be used to clear the console and history of entered commands (arrow up or down). Now when starting the game manually with a .bat file you can use these additional arguments: -login XXX, -password XXX, -debug_console, -debuginfo, -masterip global.
12. Other important but small things.

Don't forget about our Discord server